Interesting break down of figures above. Just one revision needed. Leinster has one Int and no regionals, whereas Munster has two Internationals and two regionals(Waterford and Kerry).

The investors behind the Midlands International Airport will remain anonymous until plans are finalised.

That's according to spokesman Patrick Little of Axis Architecture.

The project is currently in the pre-application stage with An Bord Pleanala.

The proposed airport would be situated between Tubber and the new motorway and the runway will be capable of landing an A380 Airbus.

It the project takes off it will connect Ireland directly to destinations such as India, China and America.

Mr Little says the majority of those backing the iniative are Irish but won't be drawn on the possible invovlement of Ryanair Boss Michael O'Leary.
by Whisky Tango
Why those destinations?

There's obviously no demand for India and China from DUB, SNN or ORK, so how would they suddenly become feasible from this new one?
by Papa8
I can see your logic Whiskey Tango. Can Ireland sustain demand for A380s either? Perhaps, perhaps not. 747s after all failed here but population and travel long-term will grow eventually.

by DonalMW
Wouldn't Connaught accommodate an A380 ??

That airport is very convenient for a very large area.

With some more development it could be developed into a major airport, instead of starting a new airport from scratch....

My 2 cents......
by Neworder79
The whole A380 thing is a red herring to get publicity. It's rare to see anything larger than an A330 in DUB or SNN these days and there are only a handful of routes into Europe planning to operate the A380. DUB have mostly failed to attract any carriers on any Asian routes with big incentive offers. This plan seems to envision some sort of Dubai style world hub for east / west carriers.

NOC had a 747 charter in a few years ago from South Africa, apron space had been their the main constraint but they are adding more aircraft stands at the moment and the apron extension, enlarged runway turnpads and Cat II ILS mean they have great infrastructure which could be put to use better use with expand services. They seem to attract passengers from a wide catchment with the holiday charters. But who knows how regional airports will fare over the next few years.

By the way the "Connaught" aerodrome name is no more, was officially changed to Ireland West in the latest AIC and charts 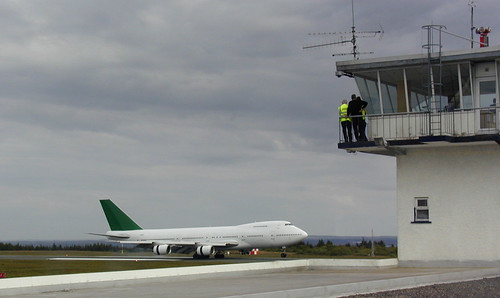 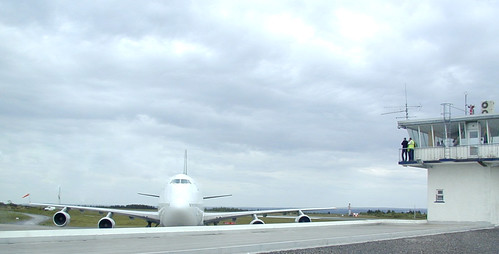 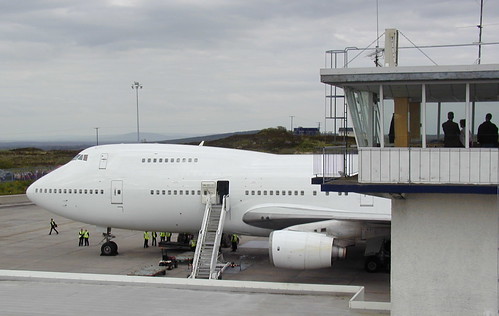 http://www.flickr.com/photos/ruthann/2135583312/in/photostream/
by Papa8
The prospect of a major construction project for the country with all the jobs that would bring might go a long way right now to getting support for the project. There does not seem to be any commitment required from the government for investment money for it. The difference compared to Knock for this project would be the prospect of a larger catchment area in terms of population and tourists. You could get a lot of people from the outskirts of Dublin for example that no other regional could really expect to draw in.

I was trying to think through the other day what airports in Ireland were built at times of high unemployment / downturn in economy.

And sorry for posting off topic

Wouldn't an A380 operate out of slightly shorter runways since it's made mostly from (Lighter) composites and has more powerful engines ??

As for stimulating the economy by employing construction workers what's wrong with getting them to build new hospitals, schools, and roads......
Or even to maintain the roads we have.....

I don't see the government offering taxpayers (or borrowed) money for any of these type projects any time soon....
by j3cub
Post Removed
by Papa8
Can't argue with funding hospitals, schools, roads however this seems to not be government-funded or perhaps partially funded. Was listening to a man on the radio the other day explaining that it took something like twenty years!!! from start to finish for many of Ireland's major hospitals. The current expansion of Crumlin's Children's Hospital is up in the air too. One thing hopefully less up in the air is the air ambulance even if it has had to be through direct fundraising. On the flying hospital theme there is a Lithuanian candidate running in the local elections in Laois who vows if elected to fly locals to Lithuania to get health treatment!
by Papa8
Well you have to hand it to enterprising landowners in Offaly. We now have a new proposal for a regional/international airport this time near Portarlington.

From Portlarlington to the world....

A third group has emerged this week in yet another bid to build a Midlands international airport - this time the favoured location being Portarlington!

Tundra Holdings, registered to Delmec Engineering Ltd with an address in Graiguecullen in Carlow, has submitted plans to An Bord Pleanála for inclusion in the Strategic Infrastructure Development Act for what they call the proposed Leinster International Airport in the Portarlington area of Offaly.

It’s believed the airport is earmarked for the Clonsast area, some four miles from Portarlington on the Edenderry road and the company has undertaken extensive research on the viability of the project in recent months.

Incredibly, this is the third company to express interest in developing an airport project in the Midlands, joining a consortium looking to develop a major facility near Tubber in Offaly and another at the existing airstrip in Abbeyshrule, Co Longford.

The Carlow-based company started the pre-application consultation process for the Portarlington bid with the Board by lodging their submission for inclusion in the Strategic Infrastructure Act on April 15 last. The act is intended to streamline the process of getting planning permission for major infrastructural projects. Only projects of economic importance within the region, those who contribute to regional development, or a project that would have a significant effect on the area of more than one planning authority can be included in the act thus bypassing the planning authority and going straight to An Bord Pleanala for planning permission.

If the proposals get through the Board consultation stage they then progress to the development of an Environmental Impact Statement, and then finally to the submission of an actual planning application to An Bord Pleanala thereafter.
by Jim

A Third?
This topic is as old as the hills and with many more groups involved.

In 1970/71 The then Offaly Westmeath Independent carried a story about certain businessmen wanting to re-oen Athlone Airfield as a Regional airport.
Athlone Airfield was located at Ballydonagh, and was closed by the Army air corps many, many years ago. When moving out they dug a massive hole in the airstrip and buried 9 aircraft in it, many with engines too!(Anybody looking for Tiger Moth Spares)

In 1985 or 86, The Westmeath Examiner(I think) printed a piece about re-opening the original Abbeyshrule as a regional.(The Rustic in the Middle )

Early 90's ELAN Executives were interested in developing Mooneys strip at the Doon, they even got the ESB to bury all overhead lines.

Then on August 1st 2002 the Westmeath Independent carried a plan by Roscommon Co.Council to build Athlone Regional Airport in South Roscommon.
This plan was among the best to date as the Authorities were supplying the Land, The Building Project was TOTALLY sponsored and the management was agreed by an Irish Airline.

Just waiting now for Mary Harney to submit her plan for Ballinasloe, (Must accomodate the Casa)

Then we will have gridlock in the overhead and An Bord Pleanala will be looking for assistance!

Jim wrote:Athlone Airfield was located at Ballydonagh, and was closed by the Army air corps many, many years ago. When moving out they dug a massive hole in the airstrip and buried 9 aircraft in it, many with engines too!(Anybody looking for Tiger Moth Spares)

Anyone got any more info on this?

In 1970/71 The then Offaly Westmeath Independent carried a story about certain businessmen wanting to re-oen Athlone Airfield as a Regional airport.
Athlone Airfield was located at Ballydonagh, and was closed by the Army air corps many, many years ago.

I too would be very interested in more info on this site at Ballydonagh which is located on the N6 5.5k ESE of the railway station. I have a 1930's IAC site at Fardrum 500m N of Ballydonagh. I wonder is this the same site.

Yes, we appear to be on the same airfield.

My Athlone historian said it was more in the townland of Ballydonagh than Fardrum.
He says he witnessed the burial of 9 complete aircraft plus many spares in the strip. circa 1930's

The actual location is now between the N6 and M6.