THREE men had a miraculous escape last night when a Cessna plane was forced to make a 'belly landing' after its undercarriage failed.

A full emergency alert was issued at Cork Airport at around 7pm as the plane circled the runway to burn off fuel and then made a wheels-up landing on the grass verge parallel to the main concrete runway.

The pilot was able to retain control as he ploughed into the grass. The plane was badly damaged but the three occupants emerged unhurt.

A major investigation into the incident by both the Department of Transport and the Irish Aviation Authority has begun.

Investigators will conduct a detailed examination of the Cessna plane to determine the precise cause of the problem.

The drama unfolded shortly after the propeller-driven aircraft took off with three occupants from a Dublin aerodrome.

The pilot noticed there was a problem the undercarriage after take-off and, as the plane passed near Cork Airport, he conferred with staff on the ground.

Officials confirmed that the undercarriage could not be lowered and the pilot realised he would have to make a 'belly landing'.

Scheduled flights were not affected.

Does anyone have anymore news about this What model Cessna ???????????
Top 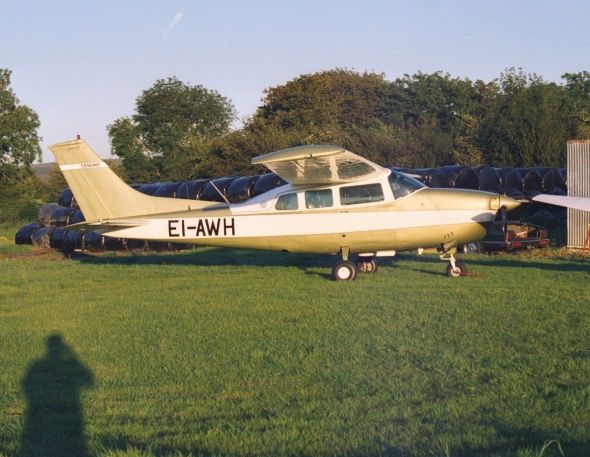 Thanks for that Mark. Going by a person i know if it,s the correct aircraft that he,s thinking of this isn,t the first time a wheels up landing had to be executed.
Top

The Aircraft was a Cessna 210 Centurion based at Rathcoole Airfield. Its registration is EI-AWH. I was an eyewitness to the crash landing and got a sequence of photos of it as it crashed. About 10 mins afterwards I put the report on ?Flying in Ireland? under Cork, Shannon and Dublin Airports. See this for a full report. The photos I took were published in The Evening Echo the next day and also in the Sun newspaper last Friday.
The pilot was on his way back from the Arran Islands when he noticed the landing gear malfunctioning and diverted to Cork for a forced landing as facilities at Cork are far greater than at Rathcoole, as you can imagine. He made a number of fly-overs to let the tower and emergency services take a closer look and finally put down parallel to runway 35. The nose wheel and right wheel were retracted but the left wheel was skewed under neat, pointing straight down. When ever I get the photos back from the paper I will upload them here.

The above photo is also my photo of EI-AWH in a former life!!!
Regards,
Aidan
Top

Aidan do you know what th owner,s intend to do with this aircraft. Will they bring it back up to a flying condition or will they scrap it???? And when it landed with the wheels up did the propellor strike (stupid question) and one of the wings rest on the ground???
Top

Flyer 1,
The exact same aircraft had the exact same problem and crashed in the exact same place 12 years ago in June of 1992. Back then the aircraft tipped over and made bleeeeeep of the wing and got it repaired somewhere up the country. This time, luckily, the aircraft stayed straight up. As far as I know the propeller was windmilling and bit into the grass. So I'd say the engine would have to be shock tested in Britain. The aircraft was built in 1969 and had the same problem before so the insurance company might opt not to repair the aircraft.
To be honest I'm not really too sure

Cessna,s undercarriage doesn,t seem to be the most reliable undercarriage ever made. Well a friend of mine who used to fly a Cutlass many years ago had frequent problem,s with the undercarriage.
Last edited by Flyer1 on Sat May 22, 2004 9:46 pm, edited 1 time in total.
Top

I remember the original wheels up landing this aircraft made in 1992 and have the newspaper cuttings from the Cork Examiner somewhere as one of my instructors ( Carl Hughes RIP) at the time was the flying it. This is the second time this aircraft has had this problem
Top

They will find the pinon gear (I may be calling it by the wrong name) for lowering and raising the landing gear, probably broke allowing the gear to hang partially down and preventing any attempts to either force it to raise entirely or lock down.

Our local flight school had a C172RG that encountered the exact same problem.

Apparently the problem was that some of the pipes in the undercarriage were worn and leaked. If this is correct I feel that it is very strange seeing that it only went for its C of A very recently. I thought the idea of the C of A was to see whether the aircraft is air-worthy!

I,d love to know who did the C of A
Top

only three places it could have been, as far as I'm aware
Top

Well it,s unlikely it was waterford because i,ve never seen this aircraft in Waterford.
Top

I saw it in the hangar in Abbeyshrule the day before.
Top
Post Reply
16 posts